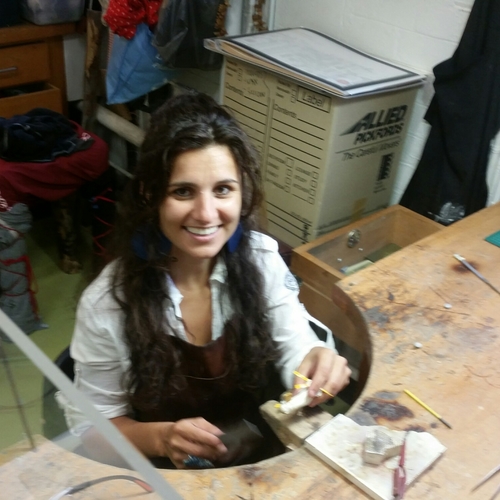 'I like nonsense; it wakes up the brain cells. Fantasy is a necessary ingredient in living. It's a way of looking at life through the wrong end of a telescope. Which is what I do, and that enables you to laugh at life's realities' - Dr Seuss

My artistic practice explores themes based on the body, the spiritual and the surreal. I see myself as a multidisciplinary social artist / activist and use the absurd and nonsensical as a platform to advocate for social change and awareness regarding sociopolitical taboo topics such as female genitalia, the social stigma of PTSD  in military veterans, the Church and LGBT+, and more recently the mandatory vaccine debate.

2020
Been keeping low working on a vaccine:
The recent COVID-19 pandemic has ignited the controversial international debate of whether vaccinations should become compulsory. At a time where finding a vaccine for the coronavirus is at its peak, the idea of ​​enforcing a mandatory vaccination law has been recommended and even implemented in some countries. In Australia, their vaccine policy is  based on fines and withholding state benefits for parents who fail to have their children vaccinated, a policy introduced in 2015 and dubbed: 'No jab, no pay'. In late May, the New York State Bar Association's Health Law Section suggested mandatory COVID-19 vaccinations for all Americans, citing the 1905 landmark case Jacobson v. Massachusetts.The US Supreme Court ruled that all adult residents of Cambridge were required to get a smallpox vaccine or be fined, and that the mandatory vaccination law was necessary to promote public health and safety. More recently in Germany, measles vaccinations became mandatory for all students. In Norway, all vaccinations are currently voluntary but as international pressure increases I wonder for how long?
The debate made me question what about our human rights? Where is our freedom to choose? Is it not my body, my choice, my life? Using syringes as my main material, I have created a neckpiece linking each syringe. Inside the syringe is another neckpiece with a pendant, showing scrambled stamped letters that make up an English word. Unscramble the letters to find out the ingredient of the vaccination inside the needle. Unscramble the word and take the injection by wearing the pendant.
What is inside your vaccine? Pro-choice? 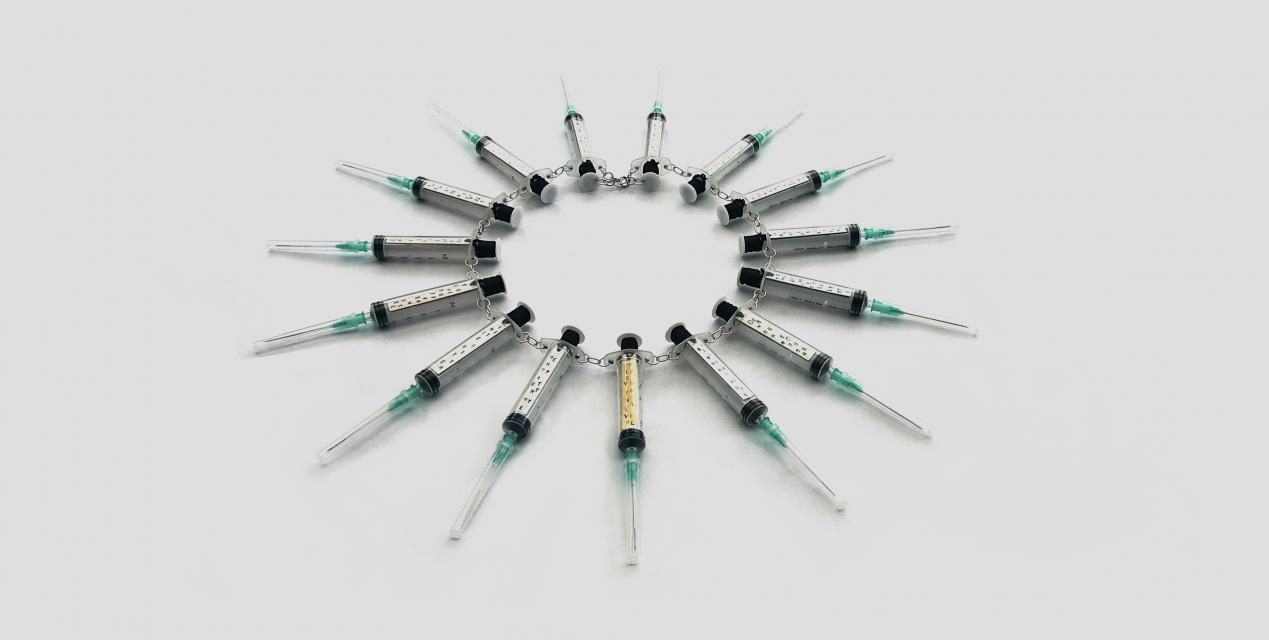 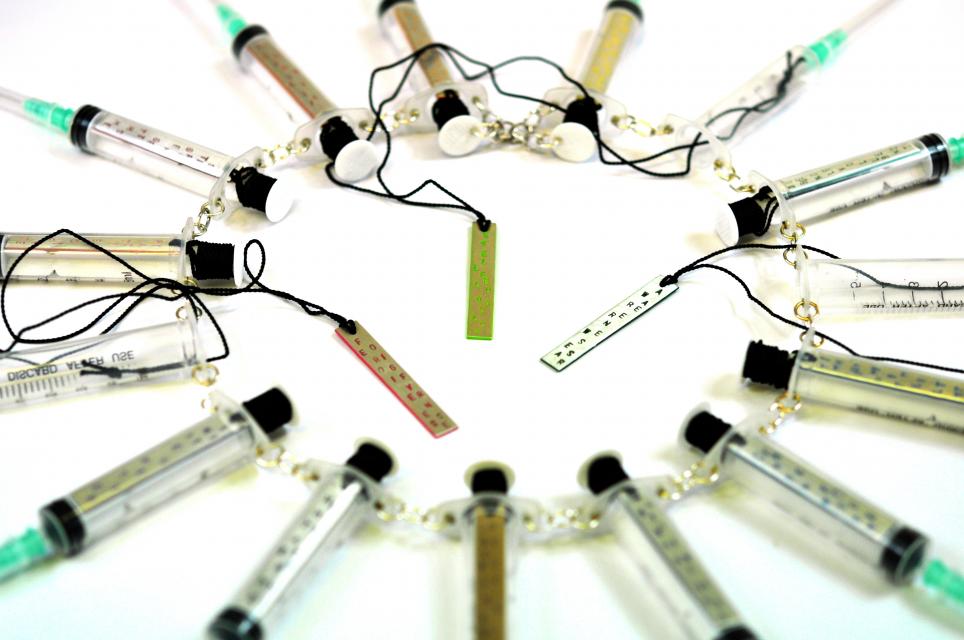 God Does Not Judge (God Is No Respecter of Persons ACTS 10:34)

This jewellery piece was created after having dinner one night with my neighbours, a lesbian couple. The dinner featured a dynamic conversation about God, Spirituality, Consciousness, the Church and the LGBT+ community. With a great interest in exploring past and current behavioural patterns, cultural values and norms inspired by scripture and spiritual literature, I wanted to provide my neighbours a new interpretation when looking at the relationship between God and the Church.

The wooden cross is made out of an old Greek olive branch and cut into small rectangular mobile pieces. The long rainbow ribbon and large cross represents the pectoral cross worn by Orthodox priests. I vividly remember looking at the pectoral cross worn by the local Greek priest based in my hometown Melbourne, Australia. Every Sunday, as a child I was forced to go to church for three hours and listen to an ancient Greek sermon that I did not undertand. The only thing that took my interest apart from the gold encrusted icons was the priest's enormous cross. It was so captivating, so powerful and hypnotic as he came towards the congregation swinging his thurible (a small metal container suspended from chains, in which incense is burned during worship services) making me dizzy with its strong smell of frankincense, myrrh, and rose.

I wonder if he would have worn my pectoral cross today... 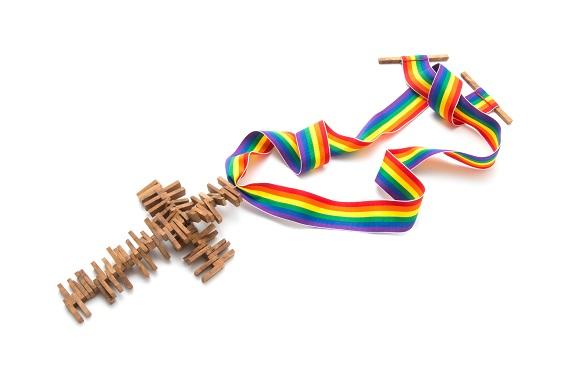 This socially engaged art project started in 2018 and will be exhibited in 2021. It looks at new ways of representing the vulva through a positive sociopolitical lens. Showing that vulvas, like our faces are different and normal. It is my social response to the increasing number of young woman undergoing labia surgery around the world and the incorrect labelling of the vulva, commonly referred to and known as the vagina. I would like to revive the vulva by bringing positive awareness to female genitalia in which the vulva is normalised, fully revealed and celebrated. Inspired by British sculptor, Jamie McCartney's Vagina Wall (2011), my project consists of casting vulvas of women from various backgrounds and age.

I see the body as a ‘vehicle’ that we use for our human experience taking into account French philosopher, René Descartes' (1649) ideas on mind/body dualism and Joel Goldsmith (1954) spiritual views on the body. They saw the body as having no will of its own, no intelligence of its own and no action of its own. It is one’s Consciousness that moves the body. The body does not move on its own free will. Which makes one question is our Consciousness in our body or is our body in our Consciousness?

The work traverses the notion of the absurd and nonsensical as a platform to engage the audience. It focuses on the physicality of the body through interacting with the ramifications of new forms, which emerge within the context of the surrealism. Humour allows the audience to easily engage with the artwork by taking away the awkwardness of publicly looking at female nude body parts, like the vulva. It can disrupt their perceived ideas and in a split second, draw the viewer in or allow something else to come out from within.

The work consists of twenty vulva cast wearable brooches that resemble racing cars. I fabricated a spoiler and attached rubber toy wheels to create a juxtaposition of materials; precious vs non precious and a child’s toy vs a treasured jewellery piece. They will be exhibited on a grand prix racetrack model in shape of a vulva. The aim is to have the audience ‘play’ with the brooches on the track/try them on, physically engage with the artwork.

NRK's ​​'Innafor' program series recently did a documentary called 'Fix Me' interviewing women from Oslo who thought their vulva was abnormal and opting for surgery to 'fix it'. But who decides what a normal vulva looks like? The surgeon, social media, the adult film industry or one's partner? Or maybe there is no such thing as a 'normal' vulva. I also think the idea of ​​vulva racing car brooches on a model grand prix racing track would attract the curiosity of the public, regardless of gender. 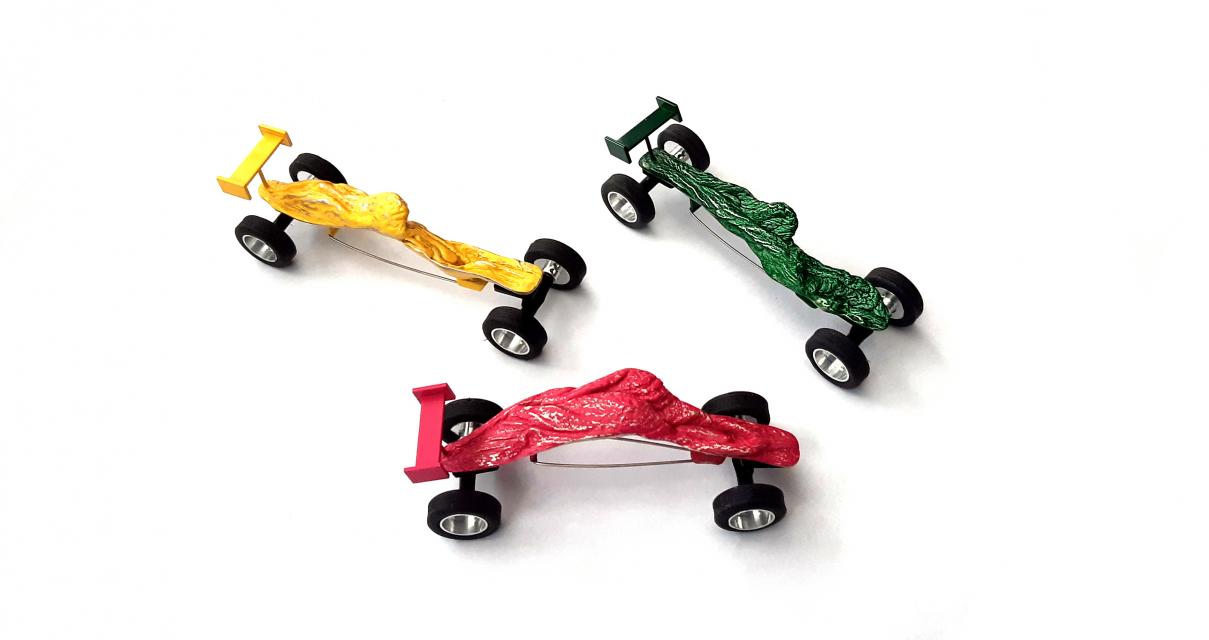 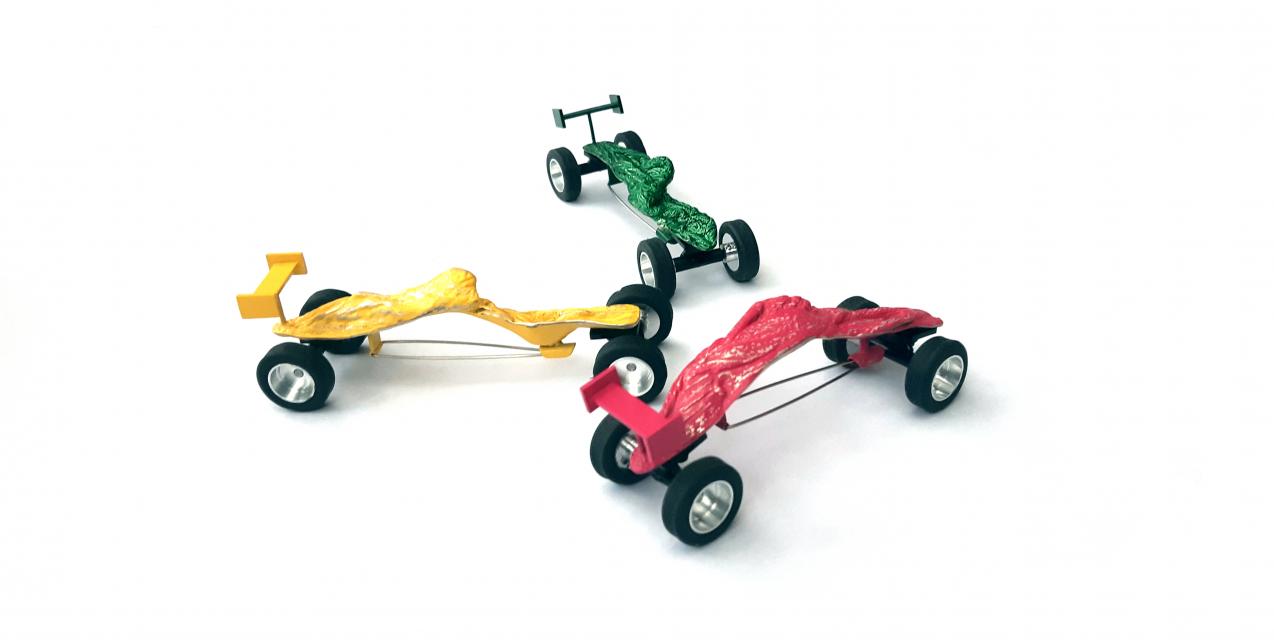